On the first workspace I started Terminal with installoptionalpackage -l which consumed 100% of cpu. Then I launched WebPositive and the same moment it's window appeared on screen I clicked on the second workspace using workspaces replicant. Boom. 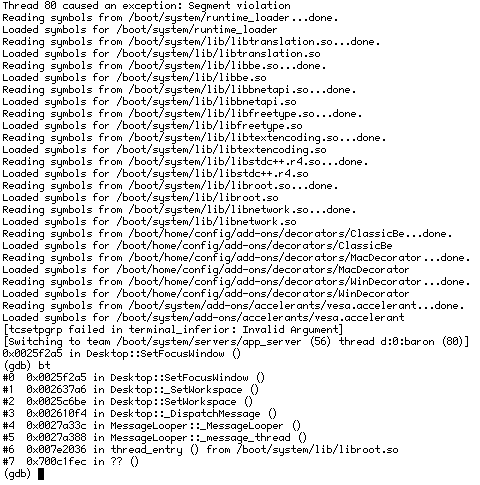 I've just run into a similar issue in hrev45130. This time app_server crashed when I tried to reproduce screen_blanker crash by clicking Test button in ScreenSaver preflet several times either with Flurry or Gravity or screensaver selected. The crash is reproducible.

by diver, 8 years ago

Never seen it after. Assuming fixed.

If this is the same bug, it has resurfaced after 10 years! I have never experienced the crash with any revision before 54154. It has happened at least 3 times since. The app_server has also crashed a couple of times, in the same hrev, when starting Youtube from W+. I'd suspect a common cause.