This pages gives an overview of what components belong to Haiku's package management infrastructure and how they work and interact. 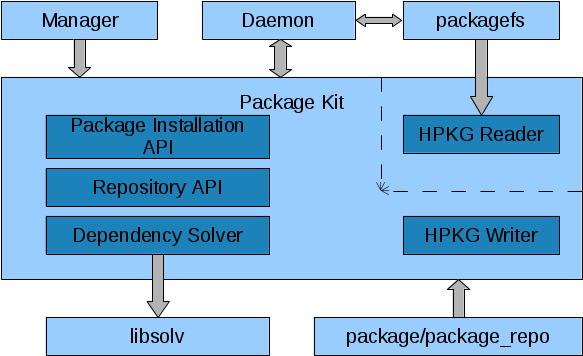 In Haiku there are three places where software is installed. "/boot/system", "/boot/common", and "/boot/home/config". "/boot/system" is the place where the base system is installed. It is immutable and should not be affected by third party software. Only installing a new system release/update will change anything there. "/boot/common" is the place where third party software can be installed system-wide (i.e. for all users), while "/boot/home/config" is only for the user's software. The discrimination between those two doesn't make that much sense yet, but when Haiku supports multi-user it will (obviously each user needs their own home directory then, e.g. "/boot/home/<user>").

At each of the three installation locations a packagefs instance is mounted. Each instance presents a virtually extracted union of the contents of all packages in the subdirectory "packages" of that location. E.g. if one would extract the contents of all package files in "/boot/system/packages" to an actual directory, that would match exactly what is presented by packagefs in "/boot/system". With a few exceptions -- packagefs provides several additional directories.

At the lowest level software can be installed by simply dropping a respective package file in a "packages" subdirectory of one of "/boot/system", "/boot/common", or "/boot/home/config". packagefs monitors the directory and, when happy with the newly added package, just presents its contents on the fly in the directory structure. The package is said to be activated. Removing a package has the opposite effect.

Things are a bit more complicated due to the fact that packages usually have dependencies. E.g. when adding a package that has an unsatisfied dependency (e.g. needs a certain library that is not installed) it is not a good idea to activate the package nonetheless. The package contents (programs, libraries,...) might not work correctly, and, e.g. when shadowing other installed software, might even break things that worked before.

The solution is that packagefs doesn't blindly act on its own when packages change. Instead the package management daemon, a background process that sleeps most of the time, examines the new situation and checks whether all dependencies are fulfilled. If they are, it tells packagefs to activate/deactivate the packages as requested. In case there are issues with the dependencies, according to how it has been configured via settings, the daemon prompts the user immediately, checks remote repositories for solutions to the problem and presents the user with the possible options, or it even performs all necessary actions without bothering the user, if possible. In the end, if the problems could be solved (e.g. by downloading additional packages), the respective packages will be de-/activated, or, otherwise, nothing will be changed.

To avoid always having to check all dependencies when booting, the package daemon writes the last consistent state of package activations to the file "packages/administrative/activated-packages". When being mounted packagefs, reads that file and only activates the packages specified by it. If the file is missing or packages it refers to cannot be found or loaded, packagefs falls back to activating all packages in the "packages" directory. The package daemon, once started, checks the state.

While manual software installation is possible, the more comfortable way is to use the package manager. The package manager has a configurable list of remote software repositories. It knows what software is available in those repositories and what is installed locally. After the user has selected software packages to be installed/deinstalled, package dependencies are resolved, and packages are downloaded and moved to their installation location.

The package manager prepares a transaction directory, a subdirectory in the "packages/administrative" directory, which contains the new packages. It then contacts the package management daemon (via the package kit) to perform the package activation changes. The daemon moves the new packages to the "packages" directory, moves obsolete packages to an old state directory (also a subdirectory in the "packages/administrative" directory, with the current date and time encoded in its name) and asks packagefs to activate/deactivate the respective packages. The old state directories allow recovery of old states. That is particularly interesting for the system installation location. As as safe mode/recovery option, the boot loader offers the user to select an old installation state which can then be booted into, instead of the latest state.

Haiku also supports a concept that is commonly referred to as application bundles. An application bundle is a fully self-contained package that doesn't need to be installed anywhere. The implementation details have not yet been decided on. The basic idea is to either mount a dedicated packagefs with the content of such a package or have a special location where one of the three already mounted packagefs instances (likely the "/boot/home/config" one) shows that content. With a bit of Tracker (or even libbe) integration that will allow the mounted directory to be opened or the application to be started when such a package file has been double-clicked.

Having three separate installation locations for software requires some considerations regarding their consistency and interactions. There's a well-defined order of the installation locations: "/boot/home/config", "/boot/common", "/boot/system". This has already been the order in which on BeOS commands, libraries, and add-ons where searched (according to the environmental variables PATH, LIBRARY_PATH, and ADDON_PATH; with the exception that "/boot/common" was only planned but didn't exist yet). That e.g. allows a user to install a new/different version of a program in "/boot/home/config" and have it override the version in "/boot/common".

This order also needs to be the order in which package dependencies are directed. While it shall be possible to have a library in "/boot/home/config" override one in "/boot/common" and have programs installed in the latter location use the overriding library, packages in an installation location must not have dependencies that can only be resolved to packages installed in a location that is prior according the order. E.g. a program installed in "/boot/common" must not depend on a library that is only installed in "/boot/home/config". When going multi-user that would mean the program would work for one user, but not for another one who hasn't installed the library. Similarly "/boot/system" is the fully self-contained base system. All dependencies must be resolved within it. A safe-mode boot should be possible with only the "/boot/system" packagefs being mounted. As a consequence these constraints have to be respected when software is installed or uninstalled.

Another challenge that comes with having three installation locations is that some packages have compiled-in absolute paths to their own files (e.g. data files) or to their dependencies. The former could be solved by building three different versions of a package, but that wouldn't work with the latter and would be tedious anyway. The solution are dynamically generated symbolic links in a fixed location, "/boot/system/package-links", that for each installed package and its dependencies refer to the respective installation location.

For each installed package a subdirectory named like the package (package name plus version) will be generated automatically. That subdirectory contains a symlink ".self" which refers to the installation location of the package itself as well as a symlink for each of its dependencies pointing to their installation locations. E.g. for an OpenSSH package installed in "/boot/common" and OpenSSL installed in "/boot/system" the directory could look like this:

Installing a different, compatible version of OpenSSL in "/boot/home/config" would automatically change the respective dependency symlink. Once supporting multi-user fully, the symlinks targets would also depend on the user ID of the process that checks them, so software installed only for the user is handled correctly.

Another problem the package links can solve are incompatible versions of the same package being installed in different locations. E.g. when a program and another program it depends on are installed in "/boot/common", installing an incompatible version of the latter in "/boot/home/config" will not break the former, since the dependency link will continue to point to the compatible version. With a bit of help from the runtime loader the same would work for libraries. In practice that's less of a problem, though, since libraries usually have a naming scheme and matching shared object names that already prevent mismatches.

A software repository is a collection of packages, usually accessible via the internet. Haiku's package management solution allows to refer to any number of software repositories from which packages can be downloaded and installed. The structure of the respository is very simple. It's just a set of files which can be downloaded via a common protocol (HTTP or FTP). One file is the repository index file in HPKR format. It lists all packages that are available in the repository together with their descriptions and dependency information. It is downloaded and cached, allowing user interfaces to show the information and the dependency solver to do the computation locally. The other files are the individual package files.

There are two standard repositories for Haiku:

For the different builds and releases there are different instances of those two repositories:

Whenever a developer wants to update or add a HaikuPorts package, the new package file has to be uploaded to their vmrepo.haiku-os.org account and the package list file for the repository has to be adjusted accordingly. A helper script is provided to perform both steps. Afterward the change needs to be committed and pushed to vmrepo.haiku-os.org. The push hook on the server analyzes the change, moves the new package file from the developer's account to the repository directory, and builds a new repository snapshot. If the package file is missing or broken, the push is rejected with a message notifying the developer about the problem.

The creation and update of repositories for official releases has to be triggered explicitly on the server. In either case the Haiku repository is built by the build service.

The package kit provides an API for all package management related tasks, including:

Package files and repository index files contain text strings -- e.g. the package short and long description -- that are presented to the user. Therefore translations for these strings must be available. Since it is impractical to include the translations in the package and repository index files, they must be provided in separate files. How exactly has not been decided on yet.

Note: See TracWiki for help on using the wiki.