Resolution 640x480 the only one available -- driver using own EDID interp. instead of (more complete) common code's EDID interpretation

The Screen preflet provides only 1 Resolution menu item (instead of 3) when Haiku is run in normal (driver/accelerant) mode, and it provides only 2 items in VESA mode. That latter one at least includes both 640x480 and 800x600, which makes Haiku more usable. Many eons ago, Haiku provided the same as BeOS, i.e. it went up to 1024x768.

I guess the Screen preflet is not the culprit since it just relies on the driver to calculate "proposed modes" ? In fact it seems monitor related; here's a suspicious (?) syslog bit:

Above, 85 Hz seems wrong, and 99 is definitely (this sure is not supported by my CRT monitor). And what with the differing lists of proposed modes...

This bug seems to be graphic-card independant -- the same lack of Screen Resolution menu items happens with an ATi Rage Pro, using the same CRT monitor. 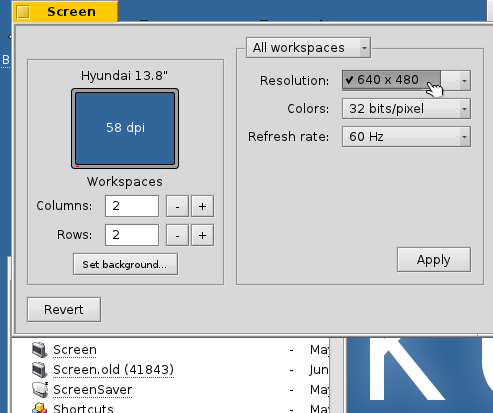 Here's the screen grab.. I'm not attaching a screenshot of Screen in VESA mode since it looks similar, except it also allows 800x600. As you might guess from the above, I've tried both hrev41843 Screen and the newer hrev41890 Screen preflets, but both revisions behave the same with regards to the "Resolution" popup.

While browsing other nVidia tickets I've noticed Rudolf's extensive troubleshooting (I hope he'll see this ticket too!) and the existence of the nvidia.settings config file. I've created it, enabled some logging, and got some info, including these suspicious lines:

This is weird, considering that 800x600 is used in VESA mode successfully (and the monitor is able to go up even to 1024x768). If this rings a bell (Rudolf ?) then any hint would be appreciated, about where I should go from there, otherwise I'll just follow my instinct to decide in what direction to continue digging :-)

Will continue digging, looking where these variables that trigger the error message come from. They seem to be global scope, aye.

Boy, graphics drivers are complex things, took some navigating the code to finally understand who called who, who has the EDID info retrieved and stored in ::si and then passed to ProposeMode ..etc, then hacked that part to accept my monitor's resolution, which makes it much more comfortable to be in Haiku now :-)

Turns out my monitor's EDID does not list its native resolutions in case EDID1_IS_DETAILED_TIMING (the third section) but only in the first 2 sections.. (especially section 2, "Supported VESA Video Modes")... I have recompiled the driver with extra logging, and found out... (could have guessed by reading the log in the first place, but then I didn't know what EDID is, reading the driver taught me that :-)

Windows seems to be fine with it -- it proposes 1024x768 so I guess it probably uses the info in "Supported VESA Video Modes" section.

I can imagine 4 ways to resolve and close this ticket now:

Anyway that's where I'm standing now, I'll stop updating this ticket and stop digging.. Though I did not succeed in finding all the information I wanted: I meant to explore the vesa/accelerant code and find out why that one goes to 800x600 (not lower, nor higher, even, that's odd!) but got blocked in there: couldn't find how it retrieves the EDID info if any; most close thing I found to EDID in vesa was ​this one , which is a dead-end for me (Trac does not allow to search the source for a symbol name it seems).

Anyhow this is probably a priority=Low ticket, if anyone cares to change that property of it.

UPDATE: turns out that I'm not alone with this symptom, and my conclusions were already reached in ​http://dev.haiku-os.org/ticket/6716#comment:8

.. where Rudolf says there are several different patches that could be done to solve this (and other similar) tickets..

Shout-out -- any chance the patch could be applied, if I write one ? For instance the "do like winders does" concept?

There are no EDID sections ignored. What is missing in Haiku is a function to compute the display timings for an arbitrary mode (ie. a function that implements the Generalized Timing Formula a.k.a. GTF). To work around that, https://dev.haiku-os.org/browser/haiku/trunk/src/add-ons/accelerants/common/create_display_modes.cpp maintains a list of modes that is applied on those extra EDID modes that don't contain the timings itself.

If a mode is not in this list, and does not provide its own timing, it's ignored - even in VESA mode, although this is merely an implementation detail.

(..) What is missing in Haiku is a function to compute the display timings for an arbitrary mode (ie. a function that implements the Generalized Timing Formula a.k.a. GTF). To work around that, https://dev.haiku-os.org/browser/haiku/trunk/src/add-ons/accelerants/common/create_display_modes.cpp maintains a list of modes that is applied on those extra EDID modes that don't contain the timings itself. (..)

Thanks for the pointers, appreciated, now I think I understand what happens in all 3 pieces of code:

To wit, my syslog's "VESA" (?) paragraph mentions both the first and second resolutions:

Whereas the /boot/home/nvidia... logfile mentions a veto on the second resolution:

.. and thus only the first resolution (640x480) shows up in the Screen preferences..

So I guess this is the first thing to fix: make the nVidia driver play nice in ProposeMode, to allow more resolutions (and maybe even for some people allow to boot Haiku at all)... And then later on implement GTF to allow the full range of resolutions) ?

Patch to be attached here soon (more a proof of concept than a ready-to-be-applied diff, clearly...)

P.S. There's still one thing I've noticed, probably not important: the mode list in create_display_mode.cpp goes up to

Whereas the Screen preflet with my "disabled EDID" hack goes up to 2048x1536... Maybe there is another -- slightly different -- copy of this mode-list somewhere in the source tree.

Do not override create_display_modes() *3-sections* guesstimate with our own (more limited) 1-section EDID guesstimate :-)

I am not sure if the nvidia driver is using create_display_mode() at all. Older drivers tend to implement this bit on their own with their own mode list. That would be the first thing to test.

As you can see in your syslog, the nvidia VESA mode does not contain anything above 800x600, and therefore, you won't find it when using VESA. That looks like a pretty poor BIOS implementation, or maybe the EDID information from your monitor are just broken (more likely).

The driver should not ignore the EDID information per se (ie. I wouldn't want to see your solution in trunk), but should either try harder to detect broken EDIDs (preferred), and/or have a setting that achieves this.

I am not sure if the nvidia driver is using create_display_mode() at all. Older drivers tend to implement this bit on their own with their own mode list. That would be the first thing to test.

And that latter function makes its decisions based on the restricted (incomplete) EDID "native specs" previously calculated by engine/nv_i2c.c's i2c_ExtractSpecsEDID() (that's the one which interprets only section 3 of EDID and ignores section 1 and section 2).

INIT_ACCELERANT() should call common/'s create_display_modes() : That one includes its own routine to interpret EDID Specs from all 3 EDID raw sections, and thus fill out correctly the si->ps.crtc1_screen.timing.h/v_display fields whatever section their value comes from, and thus the enforcing of these fields would not need to be commented out any more (as I proposed they be in my, quote, unquote, "patch" :-).

What's more, ProposeDisplayMode.c indeed has its own copy of modes:

So, I'm glad I picked your brain to find out exactly where the problem is :-)

That driver needs to indeed call create_display_modes() (from common/) to make sure EDID data is interpreted correctly in all cases.

I don't have enough time to work on such a significant change myself, but at least if others pick up this ticket later they'll know where to start from.

P.S. I cannot uncheck the "has Patch" box, it's grayed out, need someone with edit privileges to do it.

I'm back in Haiku with a new drive after my HDD troubles, and went directly to Alpha3... But I'm being punished for it as there are regressions since 41384: VESA mode now plays "hard to get", and in native nVidia mode I'm now locked out of even 800x600 (even hacking the driver does not work any more, using either the exact same binary build as before, which I had backed up, or rebuilding my hack from source!)

Investigating since yesterday evening.. First thought there had been a commit to trunk just before 42211 that changed the behavior of the app_server and/or graphics drivers, but didn't find such a change.. Now searching for a Plan B...

Turns out I have to do some voodoo hoodoo to boot now: I have to change the VESA resolution in the boot menu safe options, in order to get a good monitor sync from the nVidia accelerant..

Behavior if I fail to choose the 800x600 VESA resolution (or if I pick any other resolution):

This could be linked to our above discussion (i.e. the nVidia accelerant does not play nice with create_display_modes()) but I don't think so, since the VESA accelerant is also affected.

So I'll file a distinct ticket soon, insisting on the VESA side of the equation as this should be easier to reproduce and debug. (i.e. the fact that VESA requires a specific resolution to be picked otherwise it fails, whereas it was smart enough to pick a resolution on its own in 41834). And when that gets fixed it will probably also fix the nVidia problem, allowing me to boot this PC without trouble.

Sorry you had to go to all this trouble to get a better picture.. I'll update the driver first thing, asap to have a setting to let through all modes if you select a setting for that in nvidia.settings.

Hope that will do for you (and these other cases).

Hi Rudolf,
I'm glad you have seen this ticket. I wouldn't consider this an emergency unless someone else needs the fix too, as I have the means to tweak and recompile your driver from source to improve my situation -- I can wait for the 'trunk' workaround and/or fix. My (somewhat pressing) issue now is the regression I've outlined in #7787, which clearly cannot be fixed in the nVidia driver itself.

When #7787 is fixed I'll get back to this one (EDID issue), maybe even try to contribute what Axel advised, but I might be out of my depth for implementing that, we'll see. I also lack the motivation since implementing the workaround is much easier :-)

Cedric (an otherwise happy user of the driver!)

(low: not using this any more, and noone else made noise about it)

From what I am reading here is that indeed it's a poor BIOS implementation of the monitor connected, as the driver uses the common code to read EDID with only lowlevel hardware line control plugged in from the driver.

The monitor only reports 640x480 via EDID, so that's why the driver doesn't work above that. I don't remember by heart if there's a setting in the driver to disable use of EDID (I expect so?), but anyhow I'd say this is not an error in the driver, but in the monitor.

Should be rare this kind of trouble... especially nowadays. Close as won't fix?

Should be rare this kind of trouble... especially nowadays. Close as won't fix?

Please do I'm no longer using that 15" CRT monitor (good riddance :-) so this ticket is no longer useful... Your NVidia driver ..etc got me going with Haiku years ago BTW, grateful for that!